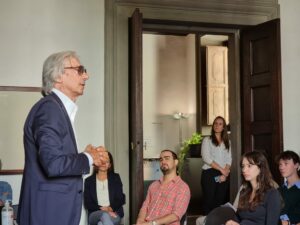 Only a lack of preparation, says ESE President

Finding a first job can be challenging for many graduates. But have their educational institutions actually prepared them for the international job market?

Unemployment does not exist, only a lack of preparation, ESE President Elio D’Anna argues

This can lead to universities churning out under-equipped graduates who have studied across the globe and are forced to take jobs they don’t want.

“A young person should be able to choose his job,” says D’Anna “No one has to be put in the situation of accepting any job to survive. To be entitled to that kind of right there’s the need to be prepared.”

It’s about more than just studying and passing exams. Effective preparation for the job market involves a more wide-ranging, expansive type of institution. In other words, failing to prepare is preparing to fail.

D’Anna says: “We need schools of freedom, international environments, practical and multicultural approaches that, in economics as much as in politics, educates a new generation of business leaders, a young ruling class, of practical dreamers able to harmonize the apparent antagonism that has always existed: economics and ethics, action and contemplation, financial power and love.”

Eurostat data suggests that the average youth unemployment rate is around 8.5 percent across the Eurozone.

Across economically stable countries such as Germany, Norway and the Netherlands this number doesn’t even reach double digits.

Yet at the other end of the spectrum there are countries with significantly higher levels of youth unemployment.

Or, put another way, there are countries full of jobseekers who suffer from a lack of preparation for the world of work.

For instance Greece, Spain and Italy are suffering levels far above the average, at 20.8 percent, 15.9 percent and 11.2 percent respectively.

This situations isn’t just a European issue, it is a global one, D’Anna argues. “For years permanent jobs have been decreasing all over the world, and finding a full-time job, especially for younger generations, seems almost impossible,” he says. “Young people are confronted by the harsh reality of not being even able to cross the threshold into the world of work.”

A recent report by Merril Lynch – “Job Quality and Escape Velocity” – argued that it is possible to tie the fall in Eurozone unemployment to a rise in people working for companies as freelancers.

Uber, Deliveroo, and many more technology companies that operate across the globe offer convenient work with flexible hours.

What they don’t necessarily offer, however, is the kind of career progression and long term security of a contract, alongside the benefits and protections that come alongside a full-time job.

Elio D’Anna believes that a strong underlying cause of the unemployment crisis facing so many graduates is to do with how their educational institutions offer a poor preparation for a highly competitive, globalised workforce.

“Young people in Italy graduate, not only six years after their European colleagues, but also unprepared, obsolete, cut out of the international world of work and with severe difficulties integrating into the Italian job market,” says D’Anna.

What do companies seek when they look at graduates applying for jobs?

“The job market is asking for young graduates, with international preparation and job experiences.” says D’Anna.

The majority of educational institutions, however, are running obsolete programmes that do not provide the practical, real-world training or creative inspiration that are beneficial to a graduate’s career development.

Many universities, he argues, have transformed into factories that churn out a class of useless, impractical and under-skilled graduates.

Feeling like an analogue graduate in a digital world is something that may be familiar to many jobseekers who have trawled through online listings or been to a career fair.

But it’s about more than just skills and an understanding of how companies work – it’s also about ambition and having exceptional mentors such as those at ESE who can offer support.

Without lecturers who can inspire and encourage students, he argues, a graduate is unlikely to be well equipped for a competitive business climate.

“No one has helped them to work out how to achieve their dreams.”

ESE, in contrast, aims to buck the trend by preparing students to achieve their dream careers, says D’Anna.

”ESE affirms the right of young people of dreaming and seeing their dream becoming reality. Going to a job interview, trying to get chosen, waiting in line and looking for anything to do, and a boss who pays their wage, is beneath the dignity level of many graduates.”