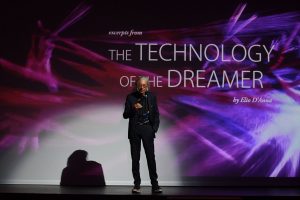 Notice the words you say…

Single out those you say more often…

Look through the feelings you experience.

Single out the most frequent ones…

Look through a day’s thoughts. Classify them. Single out the most persistent ones, those that appear with a higher frequency. You will realise that they repeat themselves and as a whole you are a quite monotonous being… Classify the physical sensations you experience in a day. If you pay a bit of attention, you will realise there is nothing new in your sensations. As a matter of fact, this search will show you that your “machine” is already programmed to feel those sensations, to experience those emotions, to have those thoughts, to pronounce those words… Like a musical instrument that vibrates at a given pace, and can emit only that sound, you are occupying only a very narrow band in the infinite of possible keys, vibrations, sounds. You will realise that everyday you sing the same song and that the external world, what you call reality, does nothing but obey to that rhythm, that sound, that vibration. A man’s reality, his ability to do and therefore to have, his degree of happiness as well as his financial destiny, perfectly correspond to his “rate of vibration”. The world is more or less narrow, more or less large according to the wideness of your song. “What song am I singing?” is the same as questioning yourself about your destiny. When you will be able to listen to it, when you will take more care of the notes you utter, you will be able to notice its mono-tony; then also the will and the ability to widen this pentagram will rise.

Like a piano, that with respect to other instruments has such a vastness of octaves to use two pentagrams, so there are man who have a wider expressive range than others do. Men who play a music that spreads on three, four, five pentagrams… because their “dream” is too wide to be contained in the narrow band that suffices the rest of mankind. Two men make business because of this fusion of rhythms, this consistency of sounds… this harmony. And a firm takes over another firm for the wideness of its music; a civilisation conquers another civilisation and absorbs it for the vastness of its chant, the wideness of octaves, the quality of sounds, the richness, the power of its music.

One day our being will be so wide to be able to listen to not only our, but also others’ song… the sounds others utter… the profoundness and the height of their octaves… their notes’ colour, timbre, rhythm. When we will be ready to stand up to the responsibility of this truth, we will find out that mankind sings a song of misfortune, of sorrow, of doubt, of fear, that it thinks and feels negatively. The whole world is in your head, like the music you play, you listen to. And your fate is recorded like in an LP grooves.

Notice how difficult it is to change even just a word of your everyday vocabulary, an accent, a pet phrase; notice the impossibility to change an attitude, a reaction, to break a routine, to go out of the mechanical repetitiveness of gestures, of sounds. Just imagine what transforming a thought, changing an emotion could mean…

Notice inside you the impossibility to catch a new idea, to accept it… to dive into the invisible, to “dream” something original, something apparently impossible… to play a single note out of the pentagram you were driven to living in. You will realise that it is easier to move a mountain. You will realise that the ageing process, the stiffening process has started long ago and soon you will not be able to resist it anymore. Rich men and poor men, politicians and employees, Nobel prizes and ordinary men, everyone takes his own song with him, everybody takes his own prison with him, sealed in an air bubble, crucified in his own role, in his own habits. The greater part of mankind obeys a programme set with birth, in childhood, and plays an hypnotic music learned from bad musicians, tedious teachers, prophets of misfortune, from parents who can do nothing but transmit the song they in their turn learned from their parents.

There are grandiose musicians, titans who sweep through the pentagrams of existence, who create and catch their music from immensity, from above, and there is a human mass resigned to play their whining, a mournful theme learned since childhood and never modified, pressing few keys with just a finger.

Once understood this, a man can have no other aim in life but escape from this narrow band where all mankind is kept prisoner, escape from its own music’s monotony and poverty. There is no greater project, no holier war than contrasting our own limits and raising our own chant.

The fall of Adam and Eve, the original sin, represents their separation from soul. The paradise lost is the same song repeating itself over and over. This is hell, this is poverty, this is the disease, this is the old age, and this is death.

If you want to change your reality, change your music, and devote yourself to widening your “dream”. It is the “dream” that creates reality. And only the “dream” can rescue us out of this tight spot of Being, out of our chant’s monotony that becomes pain in our bodies, fear in our feelings and doubt in our minds.

If you study yourself, if you observe yourself, you will know more of yourself and day by day you will be able to broaden your dream, moving, creating, and modifying its elements. Everyday you will realize more and more that “dream” is more real than our illusion of acting in life.

Through dreaming you will create relationships, solve problems, enter inaccessible worlds. You will learn how to dive into the invisible. Reality will follow, will take our dream’s shape and dimension. Knowing ourselves is discovering that man is alone in the universe, sole responsible for anything happening to him. Have the courage to dream. Have the courage to be an individual and conquer all that is possible to conquer… in your head.