The Economics of Immortality

The Economics of Immortality 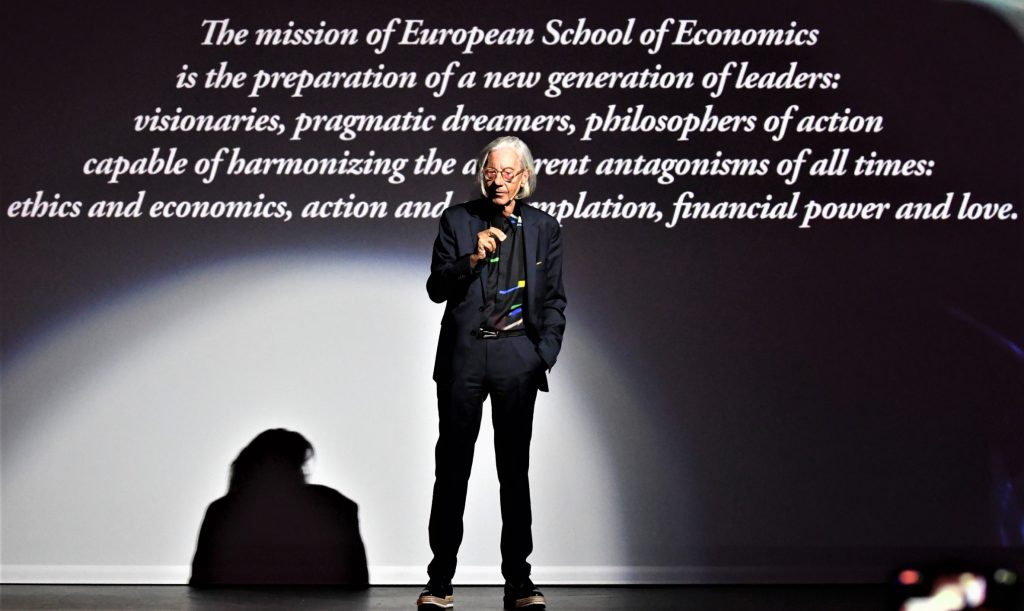 Conference hosted by the European Commission

Thanks to the President of EuReform, Steven Colin for inviting me, to EC for hosting this conference and to Daniela Terrile for organizing it. The idea to schedule it at lunch time is congruent with my purpose to give you food for thought.

I came to join you – your association – for the common purpose of raising the effectiveness of the European Commission – a body so important and vital for Europe – and for bringing to you the results of our research.

I know beforehand that after expounding them, you will find it hard to accept most of the crucial findings of my studies and of the fundamental ideas and principles that they are based on. But let me pose to you a question:

Who among you can state that he has discovered an amazing idea throughout the entire course of his life?

Who has ever come across something so outstanding that you could cry out “I have never heard such a thing before”?

One Idea can Change the World

Now is the time to tell you something more about the title of this conversation: The Economics of Immortality. What does it mean – immortality? Why do we talk of immortality in a conference about economics?

Let me pose to you a question. When did you last pronounce the word ¨Immortality¨? When did you last utter the word ¨Infinity¨? Or, ¨Timelessness¨? Or, ¨Eternity¨? When was it? Most likely, it was in a perfume shop. “Give me a little bottle of Eternity; give me Love Forever; give me Immensity”. Then, once we have bought the perfume, we forget. We hardly utter these words more than a few times in a lifetime. Why? Because, they are extremely powerful words. They are engaging to the point that just to utter them will produce a change in our reality. What does immortality mean? It means something very simple. It means the absence of death. If there is no death, there is immortality. Why do we need to bring in this concept in economics?

The economics of immortality

Until now, all economic systems have dealt with survival – with peoples’ basic needs: food, shelter, clothing and reproduction. From this point of view, the economics of Neanderthals and the economics of a modern complex society are essentially the same.

The new economics of the coming decades deal no longer with survival or how to keep people alive for a few decades, but with immortality. New technologies and resources aim at the indefinite extension of each human life. This is the beginning of a twenty-first century economics of immortality.

All existing ideologies of left and right are outdated and obsolete. Powerful forces coming from the individual and not from the mass are steadily rescripting the fundamentals of life. You as an individual are called to create, through your dream, a new humanity and redesign within yourself a new economics and a brand new epoch.

Traditional education, the schools and universities we know, cannot teach the young to free themselves from conflictual thinking, prejudices and obsolete ideas, nor teach how to dare to dream the impossible, to upset any mental limit and any inner stockade, and to cultivate in themselves an indomitable passion for greatness. In order to do that, we must nourish our students with the idea of immortality, striking down the preconception that death is invincible.

The economy is a reflection of the Being. One fragment of eternity is enough to summon vast and courageous ideas, and unimaginable solutions. The conviction that death is something unavoidable is what limits us; it is at the root of our every constriction, shackling our creativity. All that we need is the idea of immortality, keeping that principle present in our own lives, and thereby freeing ourselves from the captivity of time.

What we call reality is only the reflection of our dreams, the mirror of our states of being. The world is such because we are such. It applies to the world economy as well. The mind of man is conflictual, his logic functions by means of contrasting concepts, and his reason is armed. This is why we know only a survival-based economy and have allowed death to become the planet’s leading industry, and the architrave that sustains the wealth of nations. From arms manufacturing to environmental pollution, from pharmaceutical production to organized crime, men and nations are serving the economy of conflict, and the economy of disaster. All of humanity is on the payroll of death.

I think that this conference should have taken place last year, in March 2008. We would celebrate forty years since Robert Kennedy delivered his speech at Kansas University. It would have been very instructive for this anniversary to read his words and to discover that forty years later we are still there, wondering about economic progress and what to do to enhance economy, to transform it from its very roots to face the planetary emergencies. Let me read the conclusive lines:

“We will find neither national purpose nor personal satisfaction in a mere continuation of economic progress, in an endless amassing of worldly goods. We cannot measure national spirit by the Dow Jones Average, nor national achievement by the Gross National Product. For the Gross National Product includes air pollution, and ambulances to clear our highways from carnage. It counts special locks for our doors and jails for the people who break them. The Gross National Product includes the destruction of the redwoods and the death of Lake Superior. It grows with the production of napalm and missiles and nuclear warheads…. It includes… the broadcasting of television programs which glorify violence to sell goods to our children. And if the Gross National Product includes all this, there is much that it does not comprehend. It does not allow for the health of our families, the quality of their education, or the joy of their play. It is indifferent to the decency of our factories and the safety of our streets alike. It does not include the beauty of our poetry, or the strength of our marriages, the intelligence of our public debate or the integrity of our public officials… the Gross National Product measures neither our wit nor our courage, neither our wisdom nor our learning, neither our compassion nor our devotion to our country. It measures everything, in short, except that which makes life worthwhile, and it can tell us everything about America — except whether we are proud to be Americans.”

The same food industry which could be thought of as the furthest thing from the economy of disaster, on the other hand, is an integral part of it through food adulteration and poisoning. The business of death borders on the food industry as it is also revealed by the fact that food multinationals like Kraft Jacobs Suchard and Barilla are totally, or largely owned by corporations like Philip Morris (tobacco) and Swiss Oerlikon Buhrle (missiles and armour-plated cars). The same applies to the health industry, when we find out that within one of the largest corporations, General Electric, the products and services of the Health Division live side-by-side with the production of a wide range of systems and technologies for combat aircraft, military transport, helicopters and land vehicles for the world’s armed forces.

Beyond GDP: The A-Mors Index

Last November 2007, the conference Beyond GDP has indicated the need for better, and more complete parameters than GDP, gross domestic product, to measure the progress of societies and make comparative analysis among economies. The European Commission is studying indicators to take into account other aspects of a nation’s wealth, like education, health and social and environmental achievement. A program of the United Nations has elaborated a human development index (HDI) to integrate the GDP with the aim to tell more about the real state of wealth of an economy.

Our research started from the undestanding of the true meaning of a most widely used (and abused) word: love. We could not find a satisfactory definition, until we were enlightened by the etymology of the Italian word amore and its Latin derivation: ‘a-mors’, which means absence of death.

The proposal coming from The European School of Economics, unheard of so far, is to elaborate a most important index, a parameter capable of measuring the degree of a-mors of societies and economies of the world. Or, if you like, how much advanced economies are based on the business of poverty, conflicts, criminality and all activities pretending to fight them, including medicine and fake philanthropy. And, as with General Electric, where we can know from the official balance sheet the turnover and profits coming from healthcare and lighting, and those coming from military production, we support the development of an index capable of measuring how much an economy relies on death and social disasters to produce its wealth.

This awareness will facilitate the redesign of a new economy,

the epochal passage from a disaster-based capitalism

to a limitless, abundant economics of immortality.