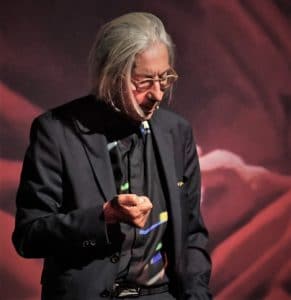 The most revolutionary technology,

Q. But the world, as we see it and touch, continues to be ravaged by the same ills… Are there two realities? The Dreamer’s reality and everyone else’s?

Elio. No, there is only that of the Dreamer. Your vision, that which is still perpetuated by conflicts and disasters, is false… Cast off all ignorance and darkness, integrate yourself, become a unity. It is your vision that needs some adjustment and not the world. I brought you the most revolutionary technology, an individual/universal technology. Internet, artificial Intelligence and the most advanced inventions of modern science and technology are flint and clubs in the hands of cavemen compared to it.

Follow the principles of the Dreamer and you will see governments and nations fall, you will see ideologies, philosophies and religions, knowledge, fantasies and prophecies and all that in which man has believed until today, all swept away. Have you ever imagined humanity without hunger and without hatred, a humanity which lives for the sake of beauty and not for need? A world without starving children, without wars, without disease, without poverty? A world dedicated to its own conscious awakening and harmony? But humanity is not ready to live in a world without wars, conflicts, delinquency and divisions… a world without antagonism, without time, without death.

Q. And in that case it will take a long time to realise this dream…

Elio. No. This revolution cannot happen in time, but in the complete absence of time, in a vertical time. There is no evolution in time. In linear time humanity can only repeat itself and its history of conflicts and crime. Between a man from the stone age and a modern man there is no difference. Millions of years have passed if we want to believe in time, without anything having happened. In the absence of time, false knowledge, memories, fantasies and prophecies and all that in which man has believed until today, will be swept away.