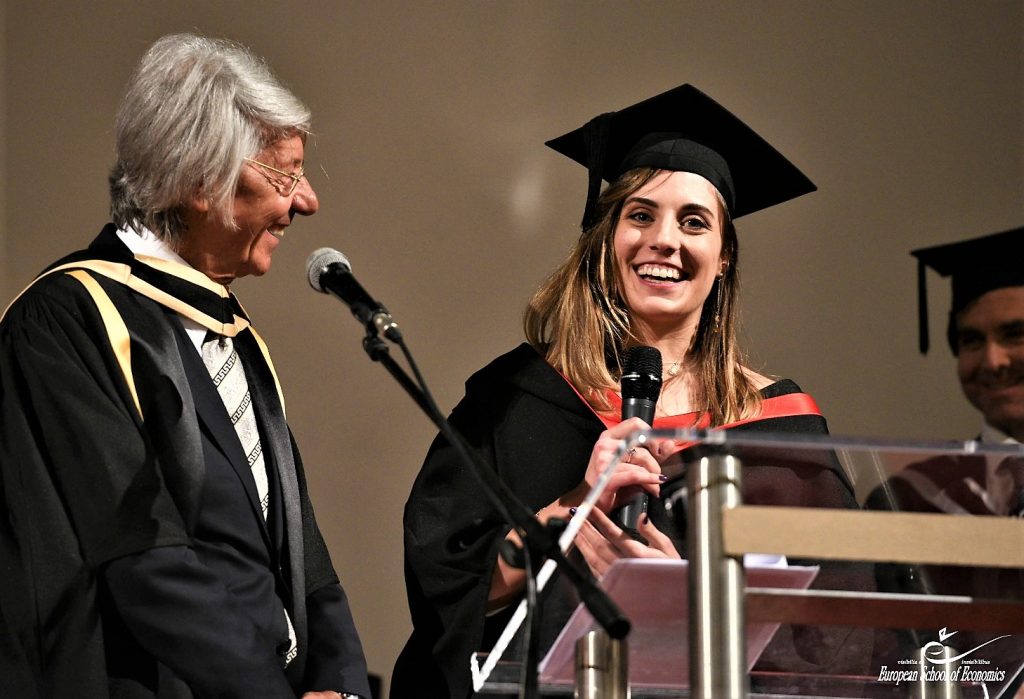 “The world is as you dream it,”

The idea on which the European School of Economics was founded, tells us that all  we see and touch, all that we call reality, is none other than the materialization of our dream.   This philosophical approach creates the basis for a work of interior transformation in young people that is addressed towards raising their level of responsibility.

If you study the biography of great entrepreneurs, the life of few pioneers who have created revolutions in our societies, you discover that behind their success is always the capacity  to believe impeccably in their dream.  A real School eliminates all that can hinder the manifestation of the  dream.   The European School of Economics stands by its students to give substance to their dreams, establishing  the contours of  a new vision which places man’s happiness at the centre of his life as both the means and end of economy.

Economy is the art of dreaming.

The capacity to transform the ‘impossible’ into ‘possible’ and then into inevitable.

Digging the Suez Channel was impossible…… building the Eiffel Tower…… going from West to find East…… what Columbus did, was crazy. To eliminate the apartheid, to set India free, to imagine the United States , and even to fly was impossible… But unless you start dreaming, inventing Icarus and the myth of flight, the Wright brothers would never even exist.

Remember that there is nothing that can happen in a man’s life nor in that of a society that doesn’t first pass through his psychology – his dream.   Pay attention to your inner being always, because the slightest change in your being will move mountains in the world of events.

The European School of Economics bears in its roots a truth never expressed in the world of economics: visibilia ex invisibilibus. Economic wealth is only the reflection of an individual, organisation or nation’s invisibility. Prosperity comes from within. It’s a process that, like every healing, starts from the inside and moves out.

A mere act of attention due to self-observation,

may change your inner state, your position in yourself,

and get you into a better position in life.

Life can be transformed only by changing your dream – that is,

by turning something lower into something higher.

When special schools, focusing on quality, came to lack, entire civilizations, races, empires, countries and peoples disappeared from the face of the Earth. Organizations, as individuals, must realize that their development and prosperity does not depend on the outside world, but on their own inner qualities, values, and ideas.

All of our thoughts, emotions, fantasies, memories and imaginings and above all our dreams, are part of a world that is intangible and parallel to what we have learned to interpret as existence. An organization is a living being, and the most subtle of its components, its ideas, values and fundamental beliefs, all come from its invisibility – and it is the invisibility of its men, in particular the founder, his own level of being and understanding, that determine its success and financial destiny.

Behind the values of a man lies his ‘dream’.

A man that has no ‘dream’ is destined to decay under the weight of social conflicts and of economic crisis.

many bankers, businessmen and stockbrokers ‘crash’ also, because they totally identify with the failing economy.At the time of a great financial crisis

In what should be a marvelous game of creativity and intuition, they instead are hypnotized to the point that they no longer realize to be the players and not the pawns, the creators and not the created, the dreamers and not the dreamed. They depend upon external conditions to plan their strategies, and rely upon budgets, reports and financial forecasts to build nothing more than a house of cards.

One day, industries and corporate enterprises will teach ‘The Art of Dreaming’ – the principles of self-improvement and inner integrity to enable their people to become advanced beings. The world of business has to realize that real, financial expansion comes out of quality, and declines rapidly when quality is missing.

Your position and role in life are determined by the quality of your own Being– by your Dream. An ordinary man, one who does not dream, is a function the nature ‘machine’, guided by nature – obedient to nature and the laws of quantities.

A man who dreams starts to work in a different direction, turning upside down his own vision. A man of integrity, a fully understanding being, contains life, and through his revealed Will can move mountains in the world of events.