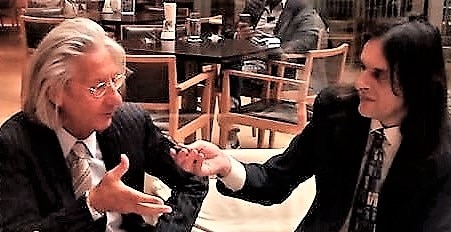 The ultimate aim of illness is healing

Misunderstanding of unity within

gives rise to the split between you and I,

us and them,  me and the others.

The cancer cell, for example, believes in a separate outer world, just as we do. This belief is fatal, and the only remedy is unity. Unity of being heals.

24th December 1997: The ultimate aim of illness is healing.  The symptoms are signs that indicate the path to healing … The illness is the cure… Any attempt to eliminate the symptom, as all medicine does, is ignorance; along with the symptom the opportunity for a superior cure is eliminated… Even cancer is a cure. But in order to recognise it preparation is necessary.

Science and conscience  are one and the same.

The invisible dimension of ideas, the world of causes, runs vertically to man’s history. Every conquest in the visible, every development in the capability of accomplishing and having has always been anticipated by a gain in the Being. Scientific knowledge and technological progress proceed at the same rate with the knowledge that man has of himself and the level of consciousness reached.

A cure for cancer has been called the last frontier of medicine. President Trump recently called for a “moonshot” to find safe and effective ways of eliminating cancer cells from our bodies.

Words such as “frontier” and “moonshot” are the language of distance. But for Dr. Steven Rosenberg of the National Cancer Institute in Bethesda, Md., the cure is very near—inside our own bodies, in fact.

Rosenberg is one of the leading developers of immunotherapy as a cancer-fighting tool. Instead of trying to bring such external forces as surgery, radiation, and chemotherapy to bear on a tumor, immunotherapy harnesses the body’s own abilities to attack cancer cells.